Introducing Maple! Maple is approximately 1yr old She’s the sweetest, girl – she’s very timid at first but if you gain her trust, she’ll give you her heart! She’s had a difficult start in life. But unlike many malnourished and mistreated dogs, she hasn’t got a mean or vicious bone in her body! If she’s scared, she’ll run towards her trusted ones for comfort – rather than away from them. Recently, she hurt her paw, and although she was in obvious pain, she let me clean and dress her wound with total trust and without any restraint! Maple loves zoomies and playing. She’s learning to chase a ball but isn’t too good at bringing it back just yet. As she gets healthier, she’s getting faster and more playful. She can run so fast it’s like she’s floating on air! Maple is great with most dogs. The only dog she’s struggled with is my sister’s rather obsessive border collie who constantly tried to herd her! She loves our old Samoyed (but he gets a bit upset as she’s so much faster than him!). Having another dog in the house would be great to both help her settle much faster – as well as to help her use up some of that energy! Maple is very intelligent and is a fast learner. She has learned “sit” and “wait” very quickly, (using voice commands and hand gestures). She’s very food motivated so that really helps. She also responds well to praise, and firm but gentle communication. Maple needs an owner / family who is home most of the time – especially in the initial stages as she gets settled. She is a fast learner so needs someone who is confident with dogs and can put in the time to do the training that she needs. Maple is fine with chooks and most farm animals – but she has a very strong prey drive and will chase anything that runs from her – which includes our rabbit. Because she’s obviously had a rough start and gets frightened easily, She is frightened of cars when out walking and does sometimes try to lung at cars. Maple would suit a quieter home with a kind, gentle owner(s). She is generally more timid around men but does warm up quickly if they get down to her level and show her that they are trustworthy. She’s extremely snuggly and loves cuddles on the couch or in bed (if she’s allowed). She will happily stay in a crate or in her bed. She especially loves her teddy and a blankie. Maple is a beautiful, kind and loving dog and she would be a wonderful addition to your life! Fostered in Wellsford 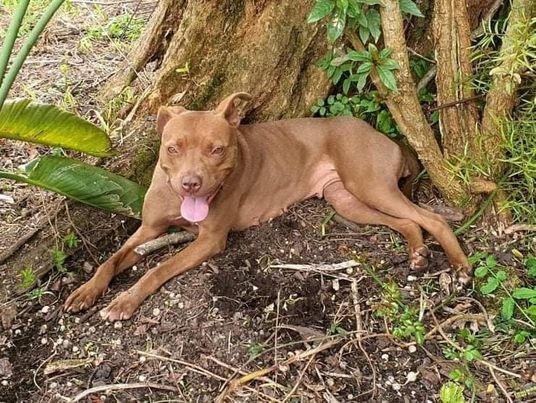 Do you have a question about this dog?